As the rivalry was played in Birmingham, Alabama for many years at Legion Field, the name of the Iron Bowl comes from Birmingham’s historic role in the steel industry. Auburn Coach Ralph Jordan is credited with coining the rivalry game’s nickname as the “Iron Bowl” in a 1964 interview. When Jordan was asked by reporters how he would deal with the disappointment of not taking his team to a bowl game, the coach responded, “We’ve got our bowl game. We have it every year. It’s the Iron Bowl in Birmingham.”

The game is traditionally played on Thanksgiving weekend. For much of the 20th century, the game was played every year in Birmingham at Legion Field, since 2000, the games have been played at Jordan–Hare Stadium in Auburn every odd-numbered year and at Bryant–Denny Stadium in Tuscaloosa every even-numbered year.

The rivalry has long been one of the most heated collegiate rivalries in the country. For many years, the two schools were the only Alabama colleges in what is now Division I FBS. It is all the more heated because Alabama has been the nation’s elite program for most of the last 10 years. Both are among the winningest programs in major college football history; Alabama has won 17 national championships and is fifth all-time total wins among Division I FBS schools while Auburn is 13th with two national championships. The two schools have been fixtures on national television for the better part of the last four decades, and the season-ending clash has been nationally televised for all but one year since the late 1970s, the lone exception being 1993, when Auburn was barred from live TV due to NCAA sanctions.

Between them, one of the two teams played in the final five BCS National Championship Games, with Alabama winning in 2009, 2011, and 2012 and Auburn winning in 2010 and losing in 2013. Alabama has also made the four-team field of the successor to the BCS, the College Football Playoff, in each of its first five editions, losing in a semifinal in 2014, winning the title game in 2015 and 2017, and losing the title game in 2016 and 2018. Auburn has yet to participate in a playoff game.

I’ll make this simple, these teams, and especially their fan bases, do not like each other. Not at all. The Iron Bowl has intensified in recent years mostly due to how good both teams tend to be and the championships that they have both played for in recent years. But also because of memorable players and plays such as Cam Newton, Mark Ingram and Derrick Henry. The play that now defines this rivalry is the “kick six” game, which resulted in an Auburn win. And then there are the crazy fans who take this rivalry to a whole other level, such as Harvey Updyke, an Alabama fan who poisoned the famous Toomer’s Corner trees at Auburn after his Crimson Tide lost to the Tigers.

If you live in the state of Alabama, you have to choose; you either yell “Roll Tide” or “War Eagle.” You’re either a fan of the big-brother Crimson Tide, or Auburn, which has its roots in agricultural education and resents the perceived arrogance of its rival. In a state with no major professional sports team, Auburn-Alabama football is a religion.

Vintage Designs For The Iron Bowl 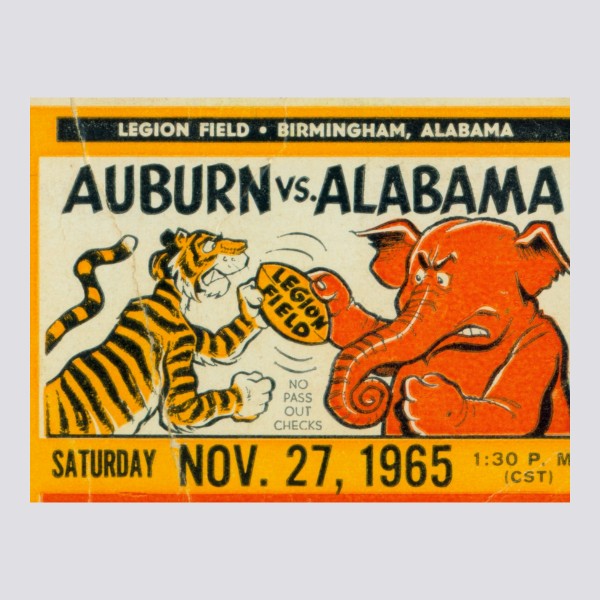 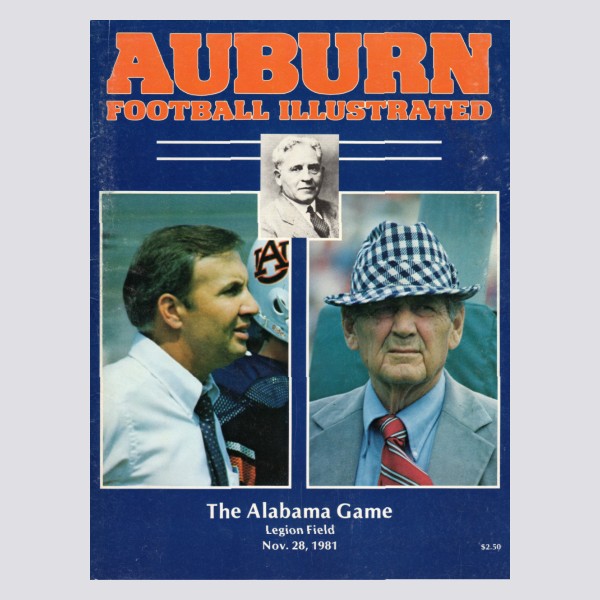 Learn more about Vintage Brand products, events and fan engagement on their About Us page.